Recognizable for the shield-like shell covering their bodies, armadillos are small animals typically found in Central and South America. Nine-banded armadillos are the only regularly occurring species in the United States and can be found as far north as Missouri, southern Illinois, and Nebraska. Given their digging and burrowing habits, armadillos are regular nuisance pests to property owners. Armadillos are nocturnal and feed on a variety of foodstuffs including insects, small reptiles and amphibians, bird eggs, and even plant matter. 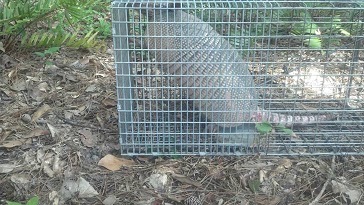 The bands that make up armadillos' heads, backs, and tails are bony plates covered in leathery skin comprised of keratin. The rest of their bodies are covered in hair and bumpy skin. Armadillos are an average length of 2 feet and weigh between 10 and 15 pounds. They are usually dark brown to gray in color, have short legs with strong claws, long snouts with teeth set back into their mouths, and long, sticky tongues.

Armadillos prefer to live in areas of dense cover, such as woodlands, forested regions, places with thick brush, and even swamps and marshlands. However, as highly adaptable creatures, armadillos can thrive anywhere there is sufficient food and water supplies. Living in underground burrows, armadillos camouflage entrances to their nests with plant debris to keep out predators.

Are armadillos known to enter homes or yards?
While their primary source of food isn't vegetation, armadillos have been known to feed on crops. As such, they may wander onto private property, enticed by gardens or farmlands. The burrowing habits of armadillos lead to numerous holes in landscapes that house populations of the animal. These holes are not only cosmetically unappealing but may be detrimental to people who accidentally step in them.

Do armadillos harm people or property?
Armadillos often utilize roads, railroads, and bridges to move from one place to another. Since they burrow along these paths, armadillos weaken the structural integrity of roadways and may cause accidents. Additionally, armadillos can carry and transmit disease. In fact, the animal is the only mammal that can be infected with Hansen's disease, more commonly known as leprosy.

Certain exclusion methods help prevent armadillos from living on private property. Erecting fences or other barriers can keep the animal away from crops and from entering yards. Reducing the amount of water and fertilizer used in landscaping makes the consistency of land less favorable to the animal. Furthermore, this cuts down on the abundance of insects and small vertebrates that armadillos consider food and look for when choosing sites to burrow.

Since armadillos can carry disease, individuals should never approach them without professional assistance. Trained wildlife specialists understand and utilize the best trapping practices and humanely remove armadillos from infested properties. Contact a Critter Control professional before attempting to remove or trap any possibly dangerous wildlife.

We can help you get rid of armadillo problems.

Request a Quote
Armadillos
Armadillos digging and damaging your yard? Holes and or piles of dirt in your yard? Call your local Critter Control office today at 800 CRITTER for effective armadillo removal and exclusion services.
Call For A Fast & FREE Phone Estimate Today
608.879.6214
(No Cats & Dogs)